Ivy Stranahan, who is widely regarded as the "Mother of Fort Lauderdale", founded the club in 1911 as the "Woman's Civic Improvement Association".  The purpose of the building was to empower women in the small town of Fort Lauderdale and create a place where women and children of all ages, backgrounds and ethnicity could come to educate themselves and help build the city of Fort Lauderdale.  For example, the Woman's Club is responsible for the creation of the first volunteer fire department in Fort Lauderdale as well as publishing the first newspapers intended for vacationers in the area.

Although founded in 1911, the club did not have a home until 1916 when Ivy Stranahan and her husband Frank, who owned the local Post Office and trading post, donated the land to the Woman's Club.  The club was a safe place for all to visit.  Ivy always had a place in her heart for children and felt that education was very important to build successful communities.  With this in mind, Ivy and the Woman's Club created the Broward County Public Library System in 1925.  The library system would provide the community with the means to educate themselves and give children the opportunity to grow and explore the unknown.  The club also started ab Education Loan Fund which would allow students to borrow money for their educations.  The fund was later turned into scholarships which would not have to paid back by the student. 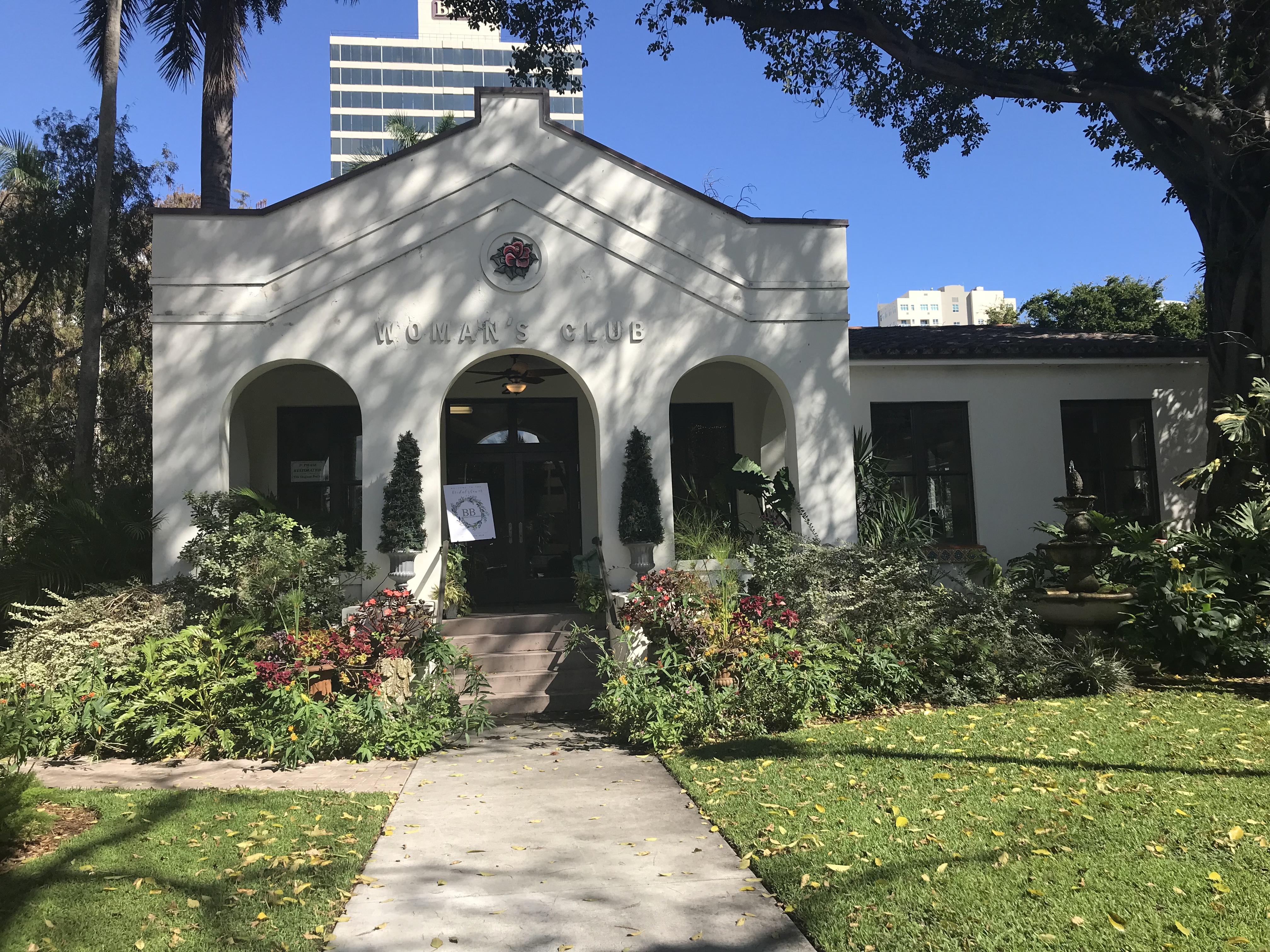 Another interesting piece of Fort Lauderdale history found along Riverwalk on the banks of New River is the "Lone Sailor Statue".  The statue was created by New York City sculptor Stanley Bleifeld who has been named the official sculptor of the US Navy Memorial.

The bronze statue was erected in honor of all past, present and future US Navy servicemen and servicewomen.  The statue is life size and depicts a sailor who is preparing to leave for war. All he has is his thoughts and the single bag that was packed in preparation for war. He stares into Fort Lauderdale's New River not knowing what is ahead.

The most interesting fact about this statue is that during the casting process, remnants of 8 US Navy ships were melted down and are now a part of the statue.  Items such as bolts, spikes, hooks and other metal pieces were added into the casting to make the statue one of a kind and one that will bring memories to all who understand the United States' military past.

The statue is another great representation of how reliant Fort Lauderdale and surrounding communities are on the ocean and the waterways.  The Naval history in the area dates back centuries thanks to our location and our knowledge and understanding of our surrounding waterways.

"He is a classic American sailor.  The statue looks like bronze but is plenty of salt, paint, sweat, fuel oil and courage stirred in" 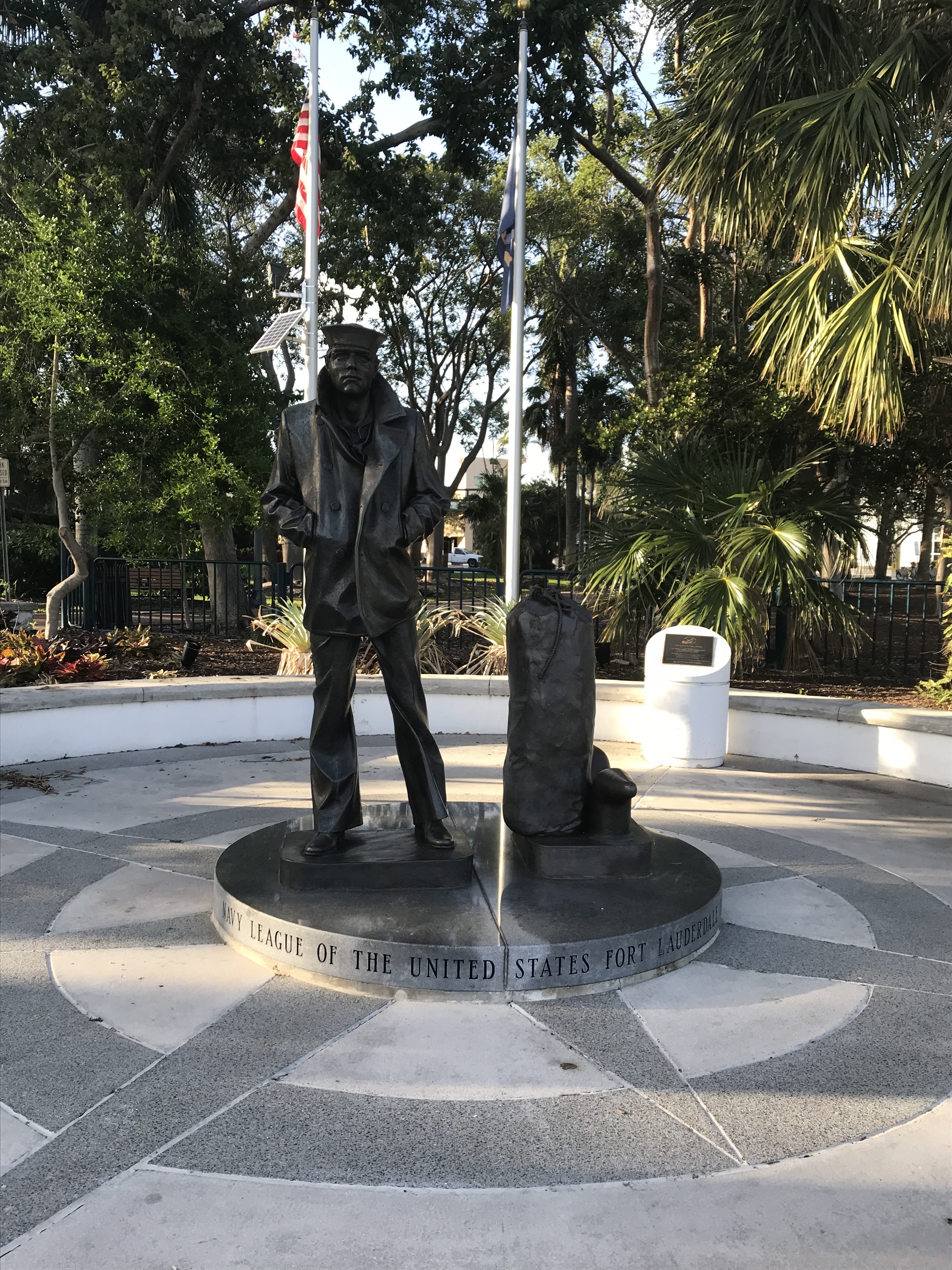 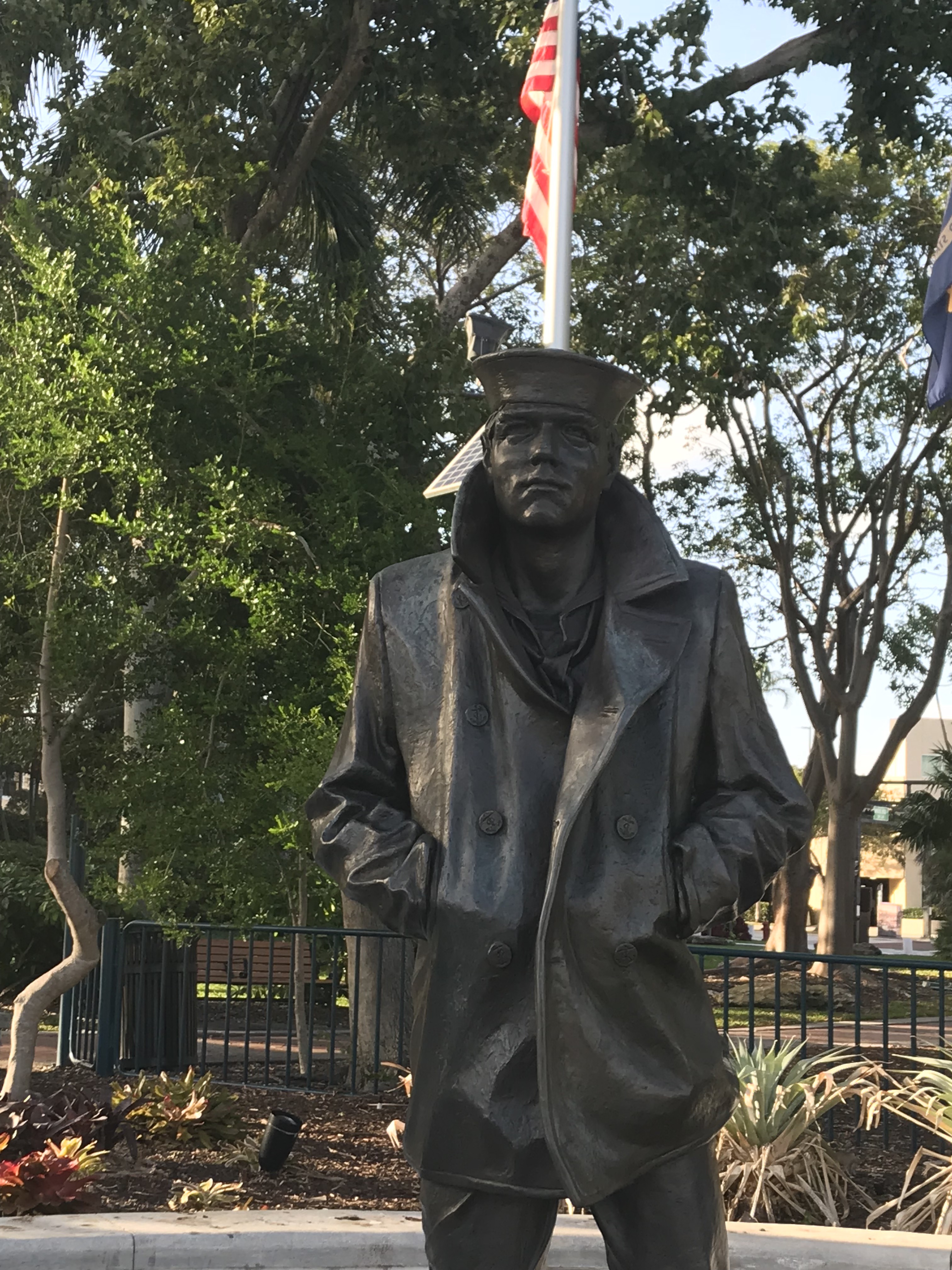 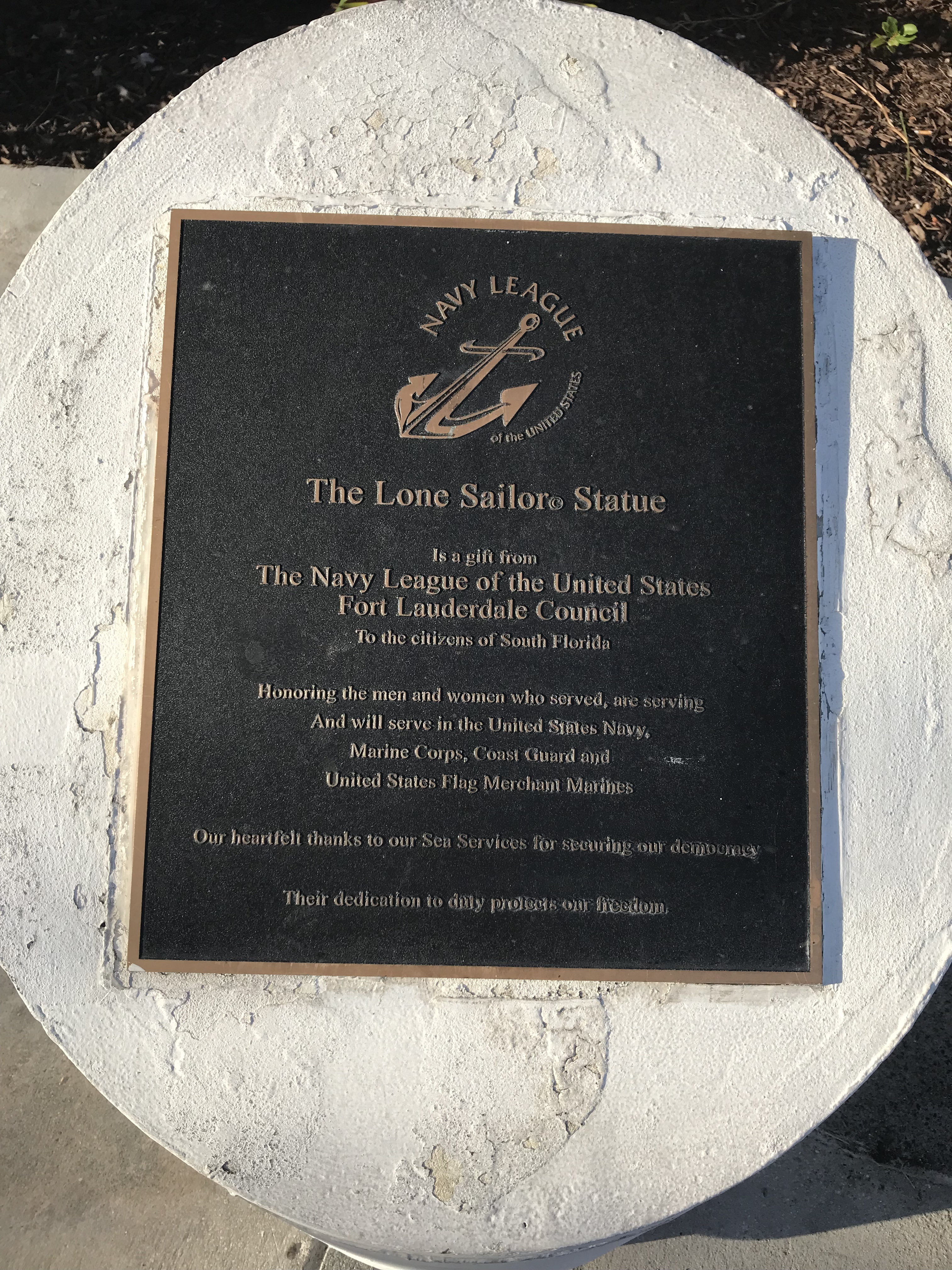 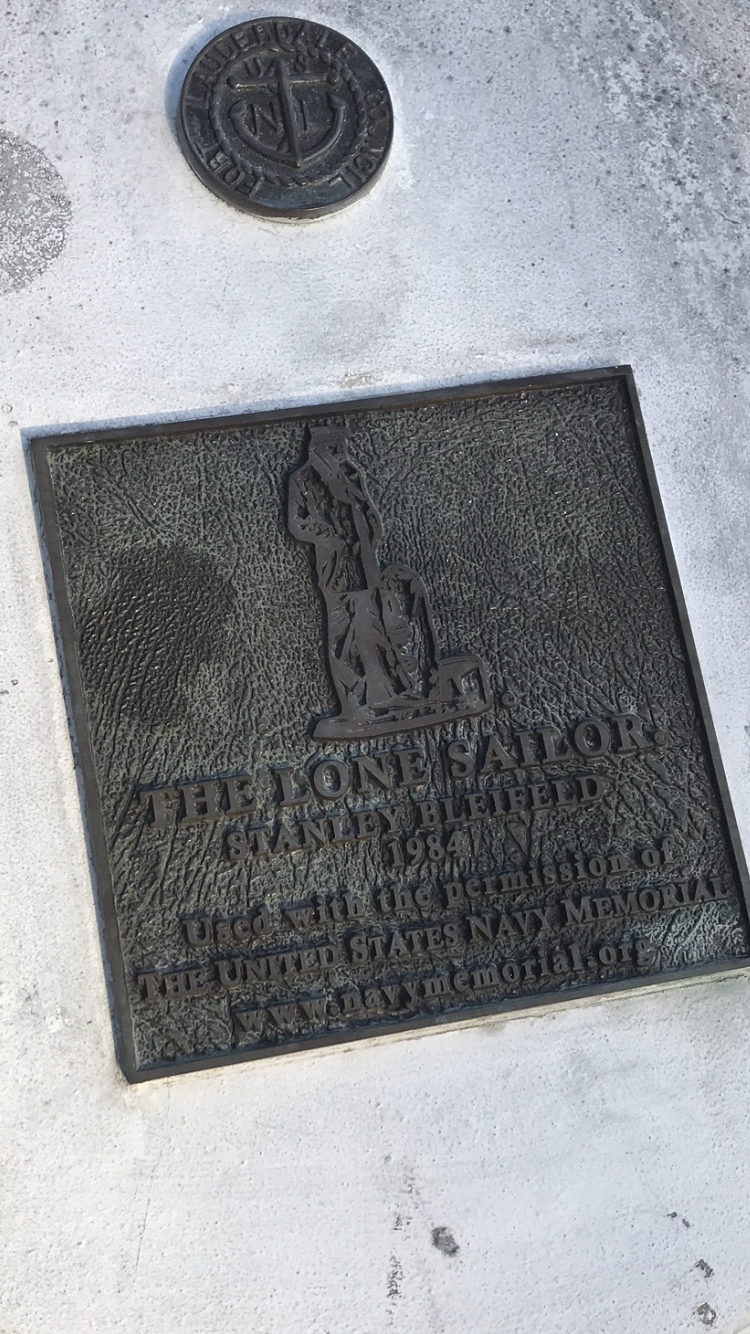 Along the banks of New River, in the heart of downtown Fort Lauderdale's Historical District is a monument erected in honor of Fort Lauderdale's greatest war hero, Lieutenant Alexander Ramsey "Sandy" Nininger Jr.

Born in Georgia but raised in Fort Lauderdale, Nininger was the first soldier to be awarded the Medal of Honor during WWII.  Nininger volunteered to join "Company K" which was progressing into enemy territory looking to buy themselves time against a superior Japanese army.  Nininger single-handedly pushed Japanese forces back until passing of battle wounds on the battlefield.  Nininger's bravery against such a  tough foe inspired his unit and changed the course of the war for US soldiers.

After hearing of his heroics, President Franklin Roosevelt posthumously awarded Nininger the first Congressional Medal of Honor during WWII on January 12, 1942. Nininger has also been recognized throughout Fort Lauderdale with a statue along New River in Riverwalk Fort Lauderdale.  He also has plaques in his honor at the War Memorial Auditorium in Fort Lauderdale's Holiday Park and at the Broward County main library in downtown Fort Lauderdale.

So next time you take a stroll through Fort Lauderdale's beautiful downtown Riverwalk area, please take a moment to stop and observe this beautiful memorial and reflect on all that Lieutenant Nininger sacrificed for this wonderful Fort Lauderdale community. 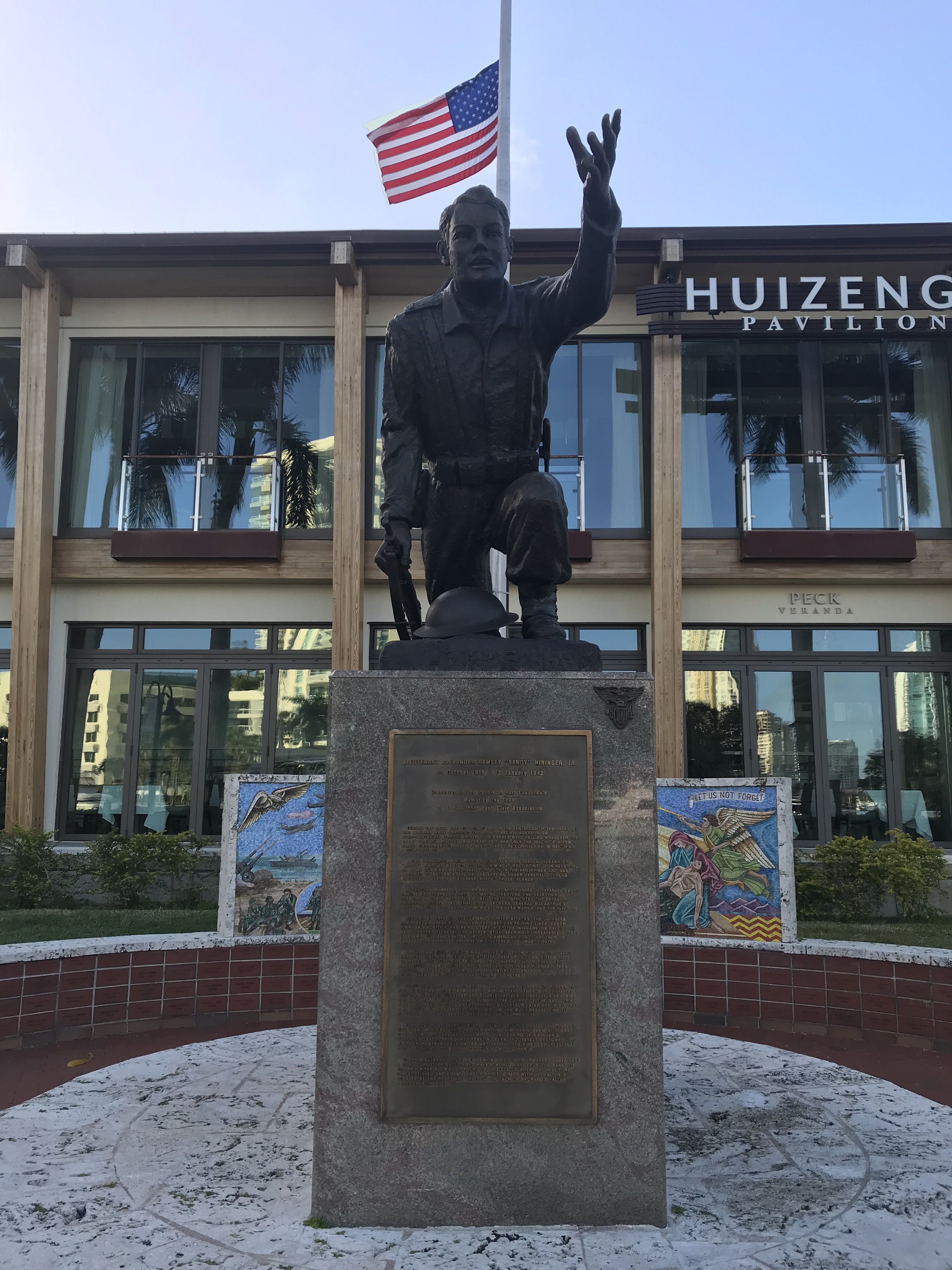 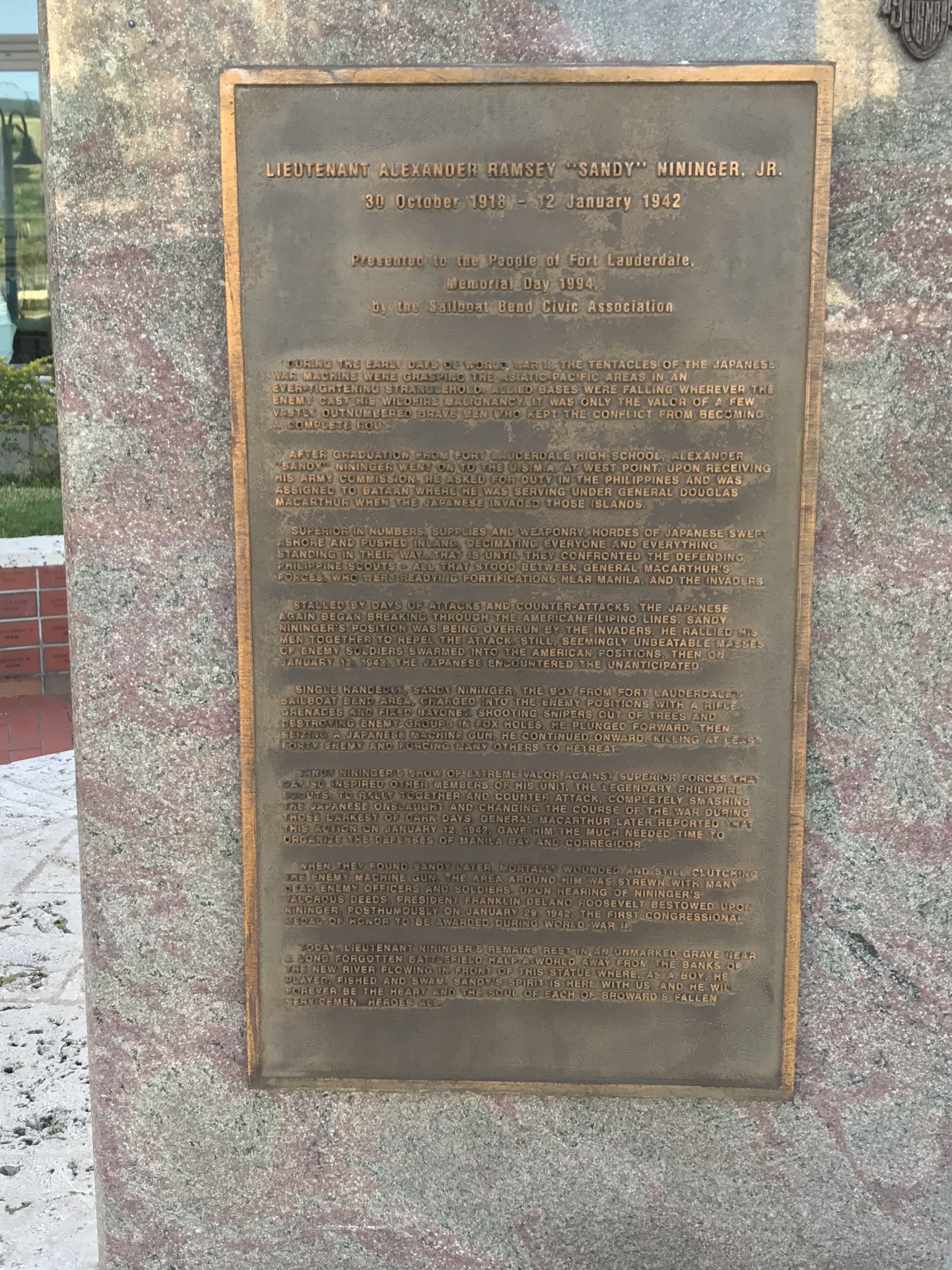 Once an old warehouse district, the Mass District is now home to several businesses and creative spaces. Artists from around the globe flock to the Mass District to leave their mark on this one of a kind are community.

Each building in the Mass District features graffiti by some of the area's top artists. Some artists include "Smog One", Bikismo and Herbert Galarza.

Later this month, the Mass District will be holding an event called the "Secret Garden Experience". The event, held on February 24th from 6PM - 12AM will feature live paintings, interactive painting experiences, craft vendors, live music as well as food trucks. There will also be an afterparty from 12-3AM at "The Hub". More information about the event can be found at https://www.facebook.com/events/740892762770697/

Visiting the Mass District for the first time opened my eyes to a new side of Fort Lauderdale. The arts scene is thriving and is having a positive impact on our city. It's great to see all of the artwork and the commitment to brightening up what was once an eyesore.

I look forward to attending the Secret Garden Experience and hope to see you there. 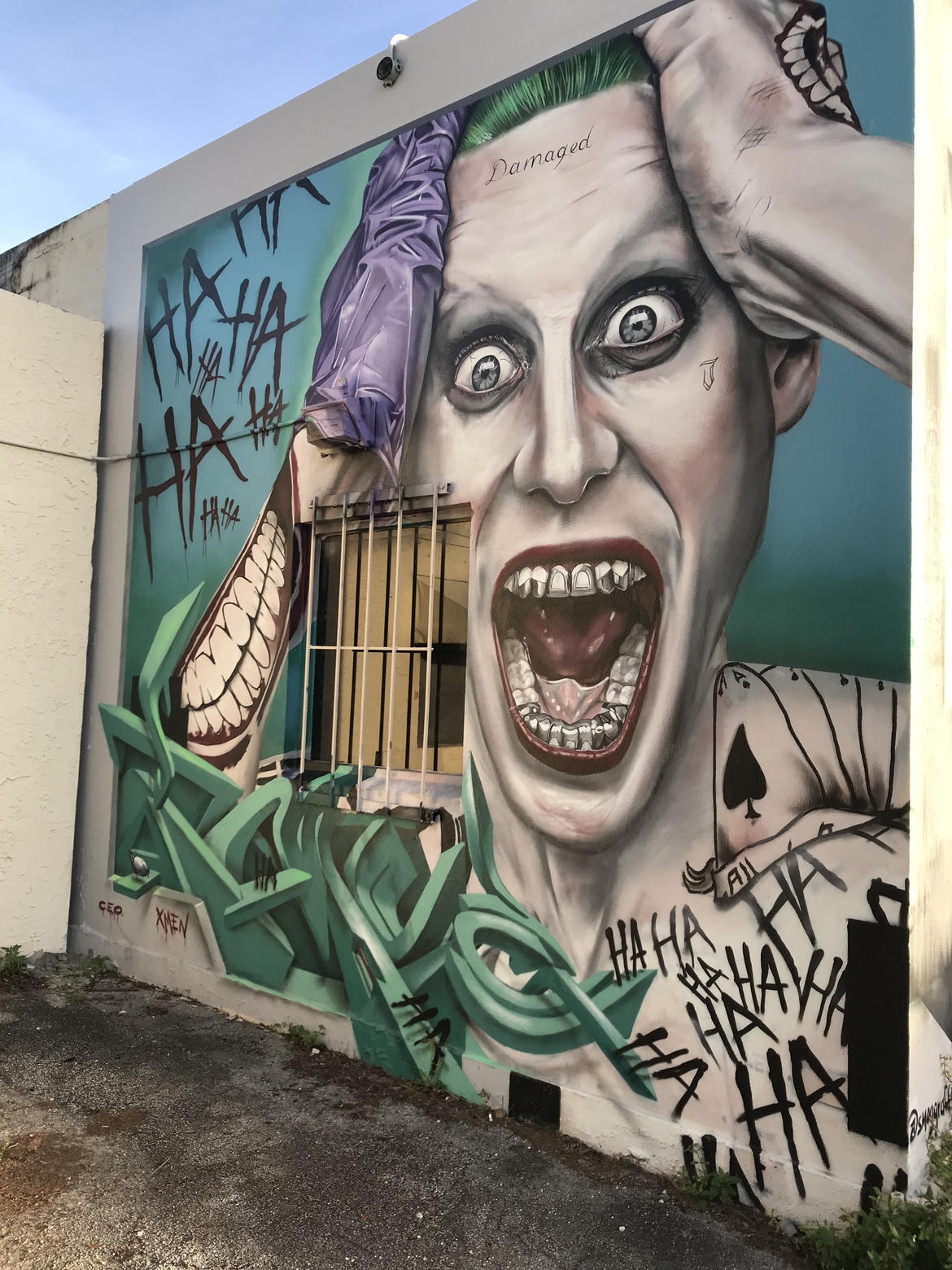 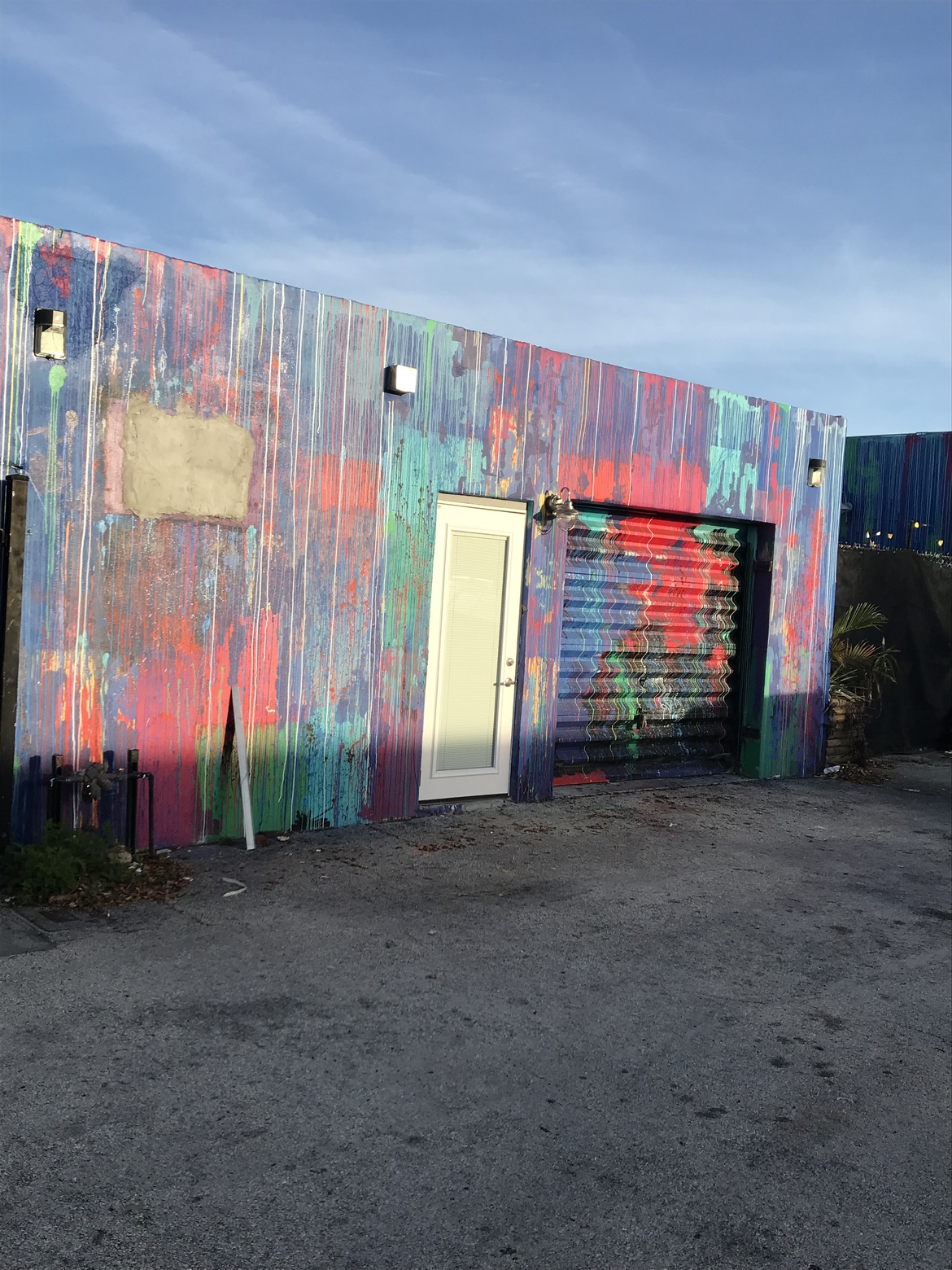 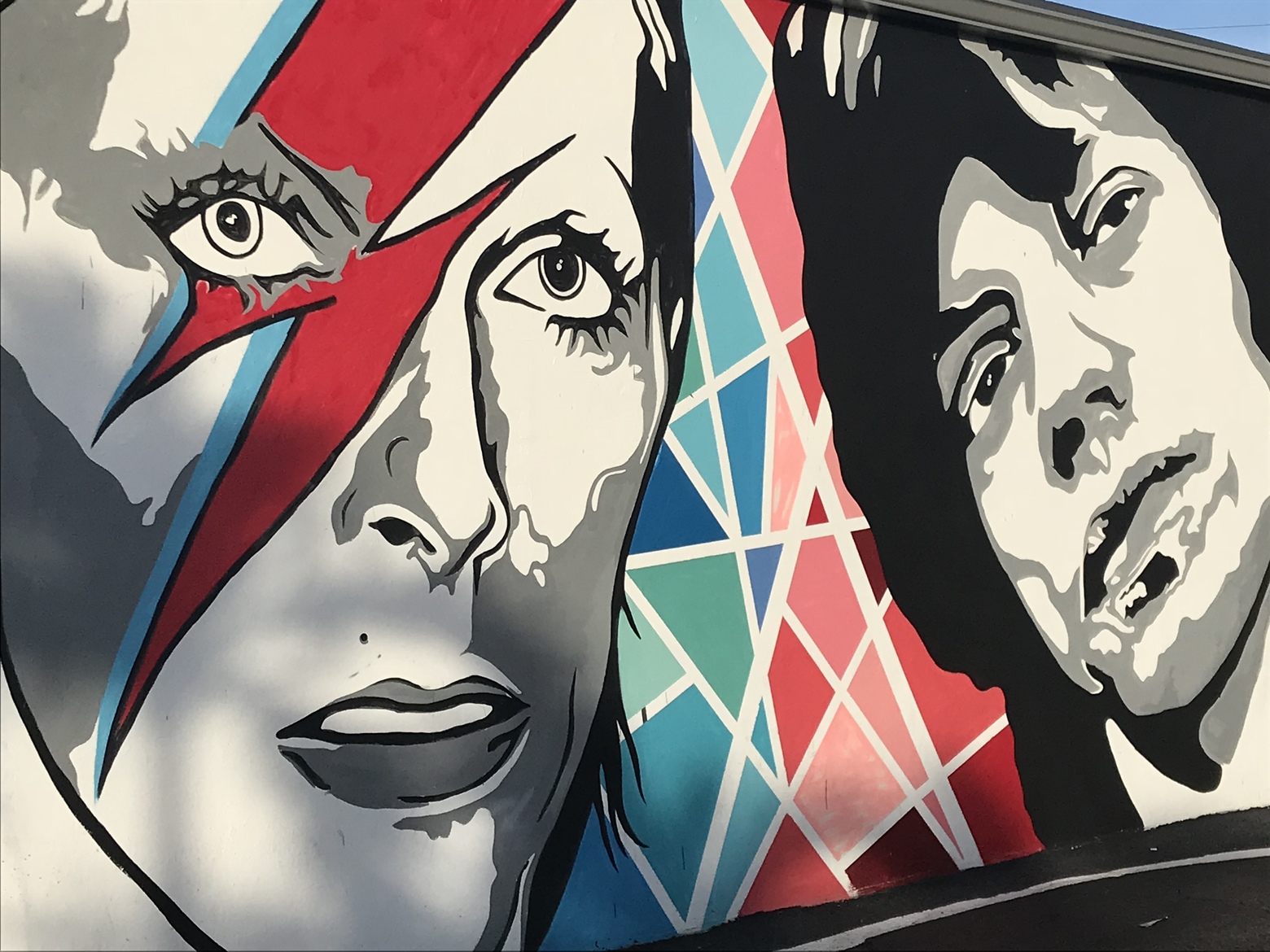 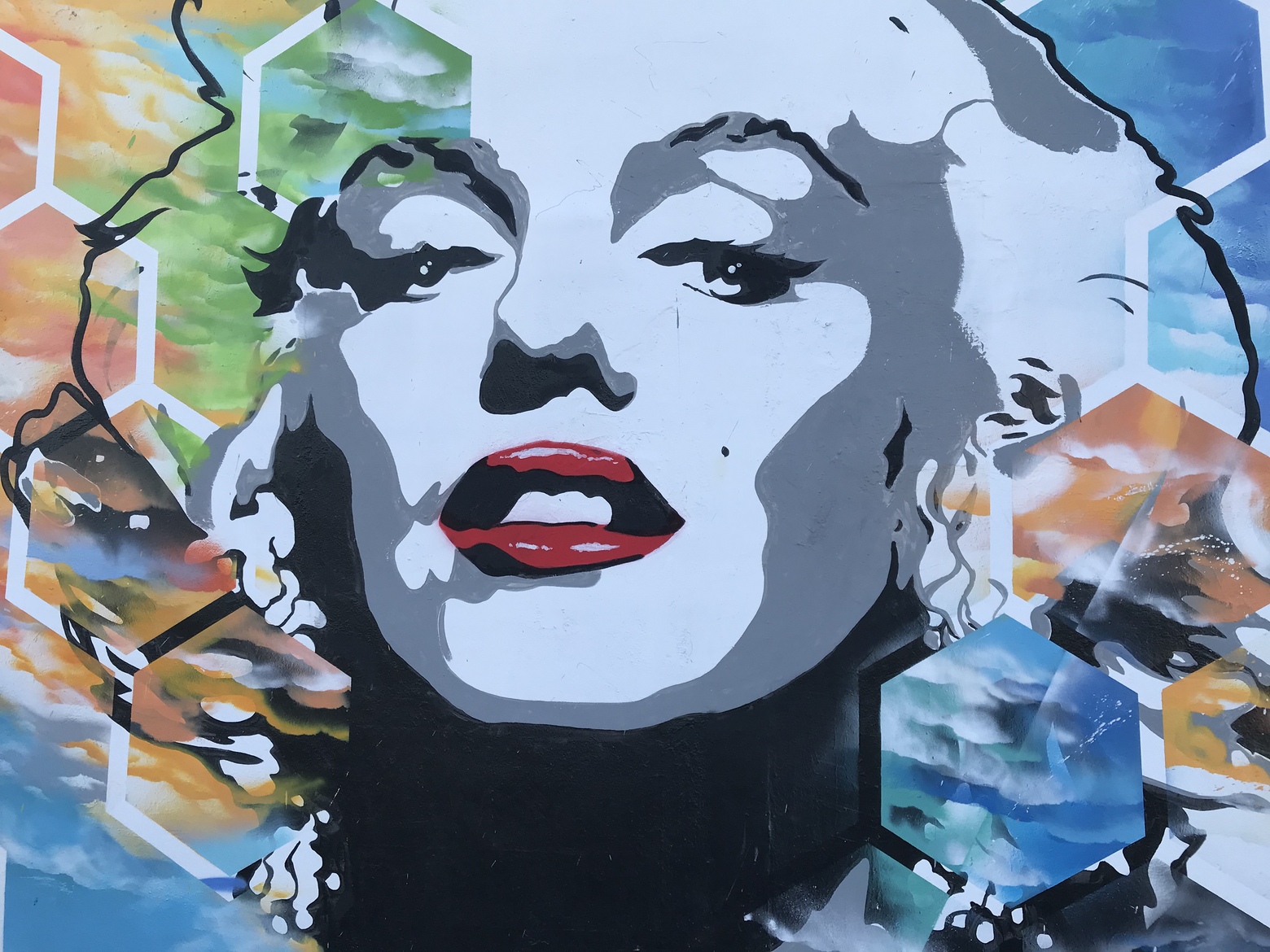 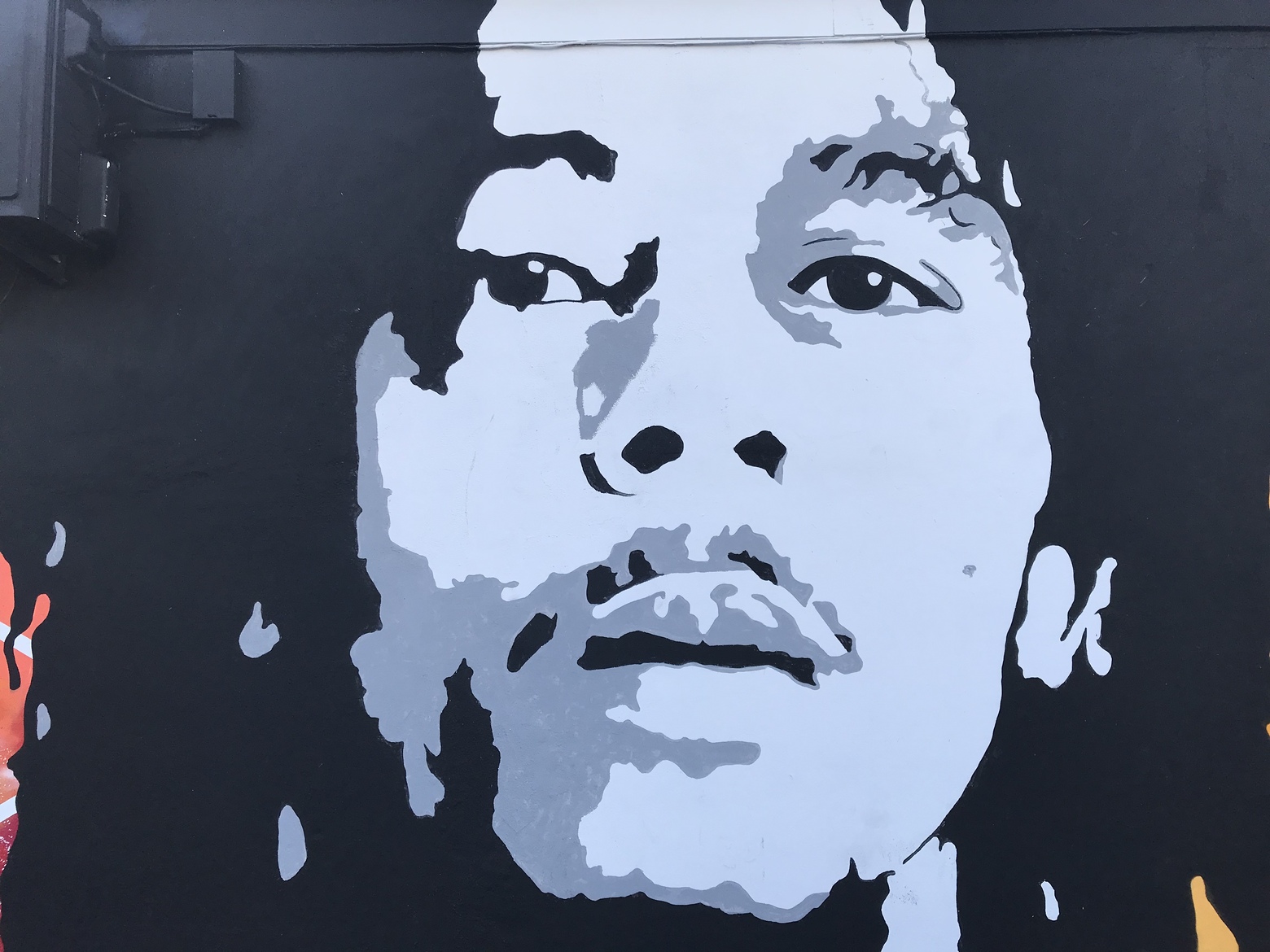 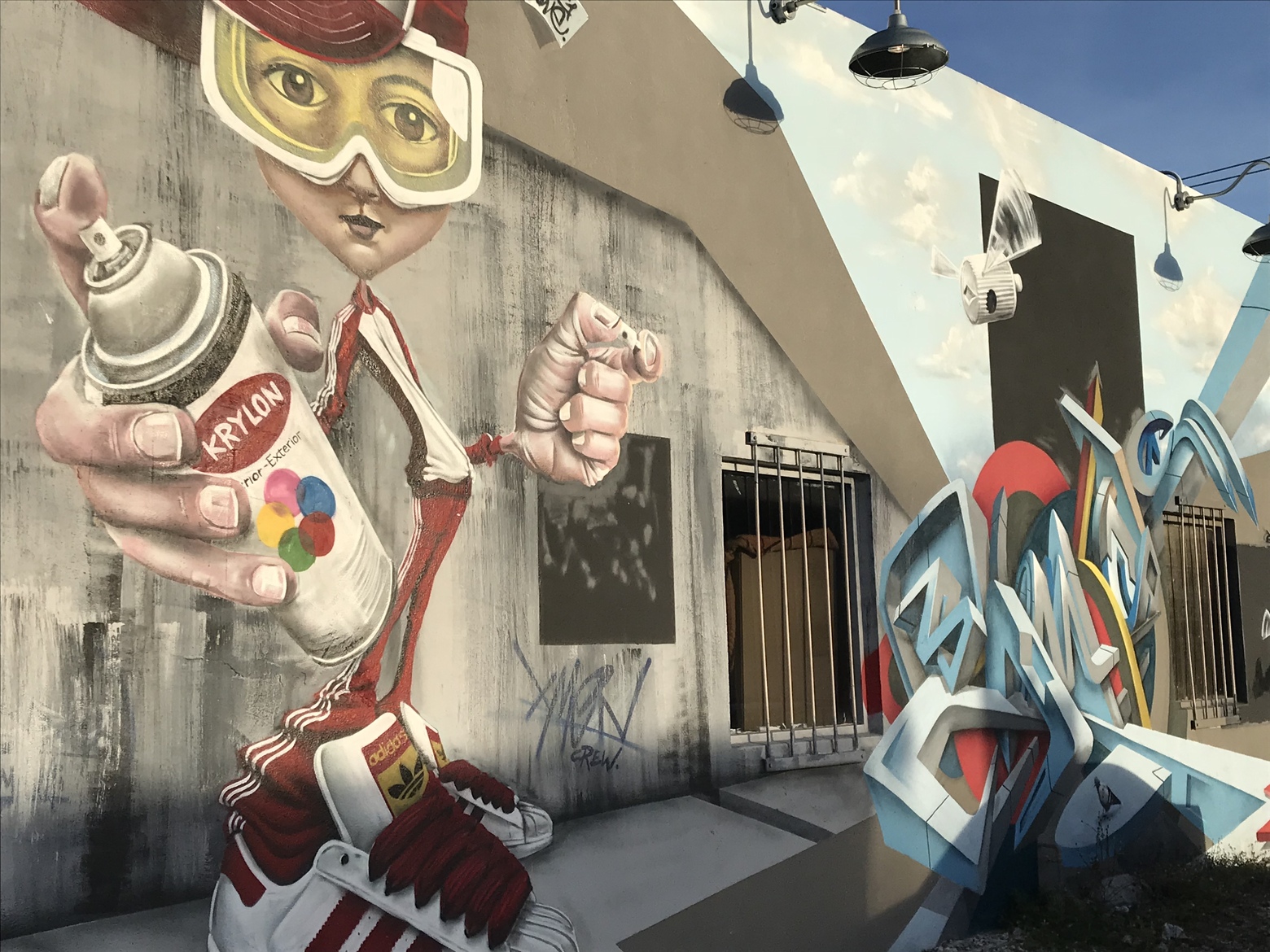 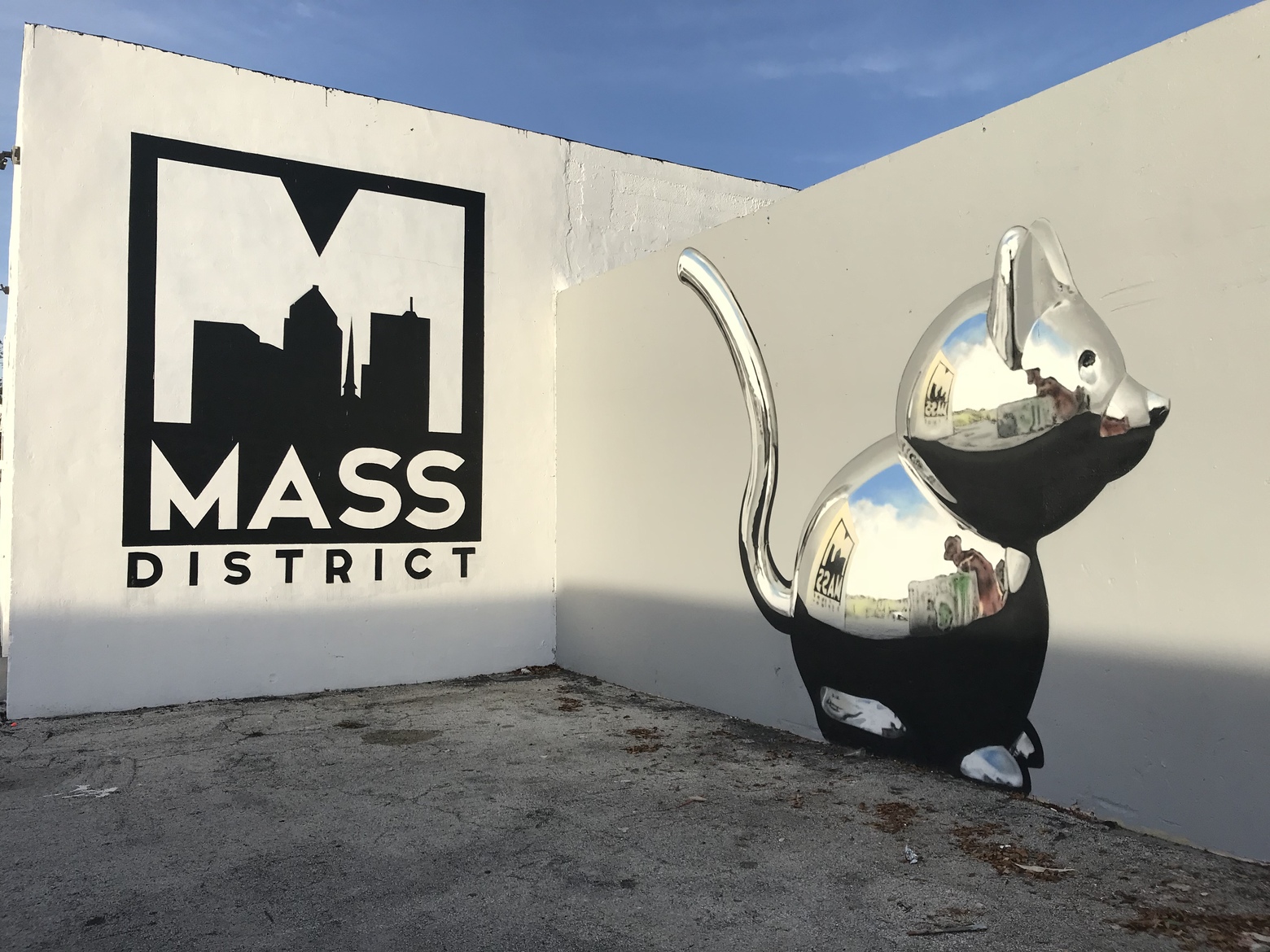 Curious about local real estate? So are we! Every month we review trends in our real estate market and consider the number of homes on the market in each price tier, the amount of time particular homes have been listed for sale, specific neighborhood trends, the median price and square footage of each home sold and so much more. We’d love to invite you to do the same!

Get Local Market Reports Sent Directly to You

You can sign up here to receive your own market report, delivered as often as you like! It contains current information on pending, active and just sold properties so you can see actual homes in your neighborhood. You can review your area on a larger scale, as well, by refining your search to include properties across the city or county. As you notice price and size trends, please contact us for clarification or to have any questions answered.

We can definitely fill you in on details that are not listed on the report and help you determine the best home for you. If you are wondering if now is the time to sell, please try out our INSTANT home value tool. You’ll get an estimate on the value of your property in today’s market. Either way, we hope to hear from you soon as you get to know our neighborhoods and local real estate market better.